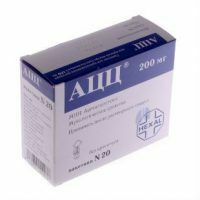 Expectorants for cough are medicines, the main task of which is to reduce the viscosity of phlegm and accelerate its removal from the body through the respiratory tract.

There are two groups of similar means: with reflex or direct action.

Expectorants acting reflexively are drugs, medicinal herbs and their extracts, which contribute to the rapid excretion of sputum from the respiratory system. Means irritate the gastric mucosa, which improves the work of the bronchial glands, increases the amount of sputum, dilutes its consistency.

Expectorants with direct activity directly affect the bronchi, provoking the production of sputum.

A separate group is mucolytics, the purpose of which is to dilute thick and viscous bronchial sputum so that it is easier to go outside and release the airways.

With a wet cough

Expectorants are prescribed with a wet cough and all conditions accompanied by sputum, for example, bronchitis, pneumonia, tracheitis, laryngitis, bronchial asthma, cystic fibrosis. These same drugs can be used to treat cough in smokers.

For the treatment of wet cough, preparations with a reflex action on the bronchi are selected to increase the sputum and quickly release the airways. Specific drugs are prescribed by the doctor in accordance with the nature of the cough attacks, their intensity and productivity, as a rule, most of them contain plant raw materials in their basis. These drugs can not be prescribed simultaneously with antitussive drugs in order to avoid the accumulation of sputum in the airways.

This kind of unproductive or ineffective cough means that sputum accumulated in the airway has an increased viscosity, and therefore can not release the passages, or it is not enough. In this case, direct expectorants are prescribed, which act on the bronchial glands and increase the amount of sputum secreted, as well as dilute it. As soon as mucus begins to lighter and more detached mucolytics begin to combine with expectorants.


Read also about when and what antibiotics are used for coughing in children and adults http://woman-l.ru/antibiotiki-pri-kashle-dlya-detej-i-vzroslyx/
to the table of contents ^

The main danger of a severe cough for a woman in the position is the risk of hypertension of the uterus, which threatens miscarriage or premature birth, fetal hypoxia. It is most difficult to cope with a dry, unproductive cough, since mucolytics are strictly forbidden in the first trimester, and are further allowed only with strict indications and under medical supervision.

As expectorants for pregnant women and sputum dissolution with a dry cough, the simplest and safest, albeit not the most effective, drugs are allowed: licorice root syrup, thermopsis( Termopsol), Sinupret, Bronchicum.

With viscous sputum, when it is necessary to dissolve it to facilitate excretion, Ambroxol, Bromhexine, and Muciltin are prescribed in the second-third trimesters.

In parallel, you can give expectorants from a cough prepared at home: do inhalations with baking soda, give warm milk with honey and a little cocoa.

To the number of such means are primarily the same expectorant herbal remedies for cough, only in less convenient forms for use. Licorice, thyme, plantain, ivy, chamomile, mint, a variety of breastfeeds can be brewed and yourself instead of ready-made syrups.


Effective for liquefaction and expectoration of sputum inhalation over hot steam with soda, potatoes, chamomile and other herbs.