Carnelian stone and its properties 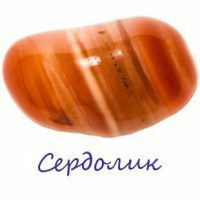 Carnelian is a beautiful semi-precious stone of reddish shades, which thanks to its physical properties, external beauty and light workability has not lost its popularity for many centuries in a row.

Carnelian is one of the most ancient stones on earthle. Scientists have found a lot of evidence that this semiprecious stone was used by people at the dawn of civilizations.

So, in the 1920s, during an extensive excavation in Egypt, on the banks of the Tigris and the Euphrates, American and English archaeologists discovered one of the most ancient cities on Earth. It was a city that flourished forty centuries before Christ, called Ur. When examining burials found in Ur territory, scientists saw in them numerous ornaments with natural stones - lapis lazuli and carnelian. Beads of carnelian were found in the tomb of the queen of this ancient city - the great Shubad.

In 1929, near the city of Mozdok during the laying of a railway quarry, a Scythian necropolis dating from the 7th-6th century BC, in which carnelian beads and a ring were found, was discovered.

Similar ornaments from carnelian were found in another Scythian burial - in the Karagodeuashkh burial mound, located in the Kuban River basin.

There are other archaeological finds confirming the use of carnelian by primitive people during the Paleolithic and Neolithic periods. True, at first primitive people made tools of cornelian, and later - amulets, cult objects and jewelry.

The most popular in ancient times, this beautiful red stone was used in the countries of the Middle East, Mesopotamia, Ancient Greece and in Russia, where it was valued on a par with pearls and diamonds.

In ancient Egypt, cornelian made ritual ornaments dedicated to the goddess Isis - the mother of all Gods, as well as amulets in the form of a three-leafed clover, symbolizing the protection of the goddess during the life of a person and after his descent into the next world. The symbols of protection in the afterlife were ancient Egyptians and carnelian figurines of Scarab beetles, the mythical Phoenix bird and the head of a snake. Such carnelian amulets were found in Egyptian tombs, including the mummy of the pharaoh Tutankhamun, dating from the 14th century BC.

Used in the ancient world carnelian and as a curative. Data on this can be found in ancient Roman and ancient Chinese, and in some ancient Greek and ancient Indian treatises, as well as the oldest Assyro-Babylonian cuneiforms, medieval European and Transcaucasian lapidarians, and works by Arab authors. They wrote about the medicinal properties of carnelian and many famous doctors, scientists and mystics: Biruni, Agrippa Nettesheim, Avicenna, Paracelsus, Boethius de Boot, Albert the Great, George Agricola.

Carnelian was one of the favorite stones of Muslims. They engraved on the carnelian rings the sayings from the Koran and considered such decorations a sacred relic.

Especially loved and revered carnelian in Russia, using it in the manufacture of religious objects and various ornaments. Here it was called "lubrication" and "kadnos".

In Europe, the peak of popularity of carnelian came in the Middle Ages, when this special stone was attributed to special magical properties.

Carnelian is an orange-red variety of agate and is one of the most popular and valuable gems from the extensive chalcedony group of minerals.

Externally, this is a beautiful translucent stone of rich coloration of red tones. Thanks to a special color scheme, reminiscent of the color of blood and fire, carnelian was associated with the Russian nationalities with the heart. Correspondingly, the name of the stone arose - carnelian or "face of the heart".

There are other theories of the emergence of the name of the gem:

The most ancient names of carnelian were also the words: "akiq", "demion" and "vaccine".A little later it became known as blood agate, linkkurie, karneolom.

Depending on the color and its intensity, these color varieties of carnelian are distinguished:

In its species, carnelian belongs to the class of silicates of the quartz group( a kind of chalcedony).

According to the chemical composition, carnelian is fibrous cryptocrystalline silicon dioxide. Accordingly, its chemical formula: SiO2.

Carnelian is characterized by the content of impurities of oxides: iron( Fe2O3), aluminum( Al2O3), magnesium( MgO), calcium( CaO) and the content of water( H2O) in the pores.

Depending on the content of these impurities, the color of carnelian can range from saturated yellow, orange, orange-red to dark red and chestnut.

Carnelian aggregates have a matte luster, which becomes waxy after processing. Carnelian stones can be both opaque and translucent in thin layers to transparency.

To strengthen the color of the mineral due to impurities of iron oxides, carnelian is heated in the sun or burned in clay pots under the influence of high temperatures.

A significant part of carnelian deposits is located today in the territory of Uruguay, India and Brazil. Also, a lot of reserves of this mineral are found in Kazakhstan, Germany, the USA and Mongolia.


But the most famous rich deposits of carnelian are found in Russia: in Buryatia, Yakutia, Chukotka and Eastern Siberia.

Therapeutic drugs with carnelian since ancient times used for:

Modern researches in the field of lithotherapy and the curative properties of carnelian thus revealed led to the formation of a separate direction - carcinotherapy.

It is believed that the use of this type of therapy contributes to:

In magical circles carnelian is the embodiment of love, faith and family happiness.

It is considered to be a sunny stone that absorbed the most powerful solar energy and is able to give its owner happiness, warmth, love and health, protect it from the evil spells of ill-wishers.

Most astrologers recommend carnelian as a talisman to people born under the signs of the Virgin and Gemini. They say that the Gemini carnelian can help to reveal their talents and help them further develop, and the Devas - to curb uncontrollable outbursts of anger.

Decorations from cornelian also resemble Taurus, Aries and Lions. They will help them to establish communication with the opposite sex, attract success in trade, protect themselves from the ill-will of the ill-wishers.

But Scorpio carnelian is not suitable. Astrologers believe that he will bring into their lives an extra aggression and excitement.

Since ancient times, people have appreciated the good machinability of cornelian. And given that this stone does not chip and is perfectly polished, getting a bright shine and a mirror surface after treatment, the masters used it as an expensive jewelry material for many centuries in a row.

And today carnelian remains a popular material for the manufacture of jewelry and glyptics, especially given its relatively inexpensive cost.

From it make beautiful inserts in brooches and gems.

Decorations with carnelian were loved by many world-famous people. Thus, during excavation and research, the following were found:

How to distinguish natural carnelian from forgery

To distinguish carnelian from counterfeiting, it is necessary to carefully study the proposed stone:

After prolonged wear on the body, decorations with cornelian must be washed in a weak solution of a gentle cleanser and rinsed thoroughly under running water. Thanks to such water procedures, carnelian will clean up the fat-contamination and negative energy accumulations.

Pictures of stone carnelian and its products 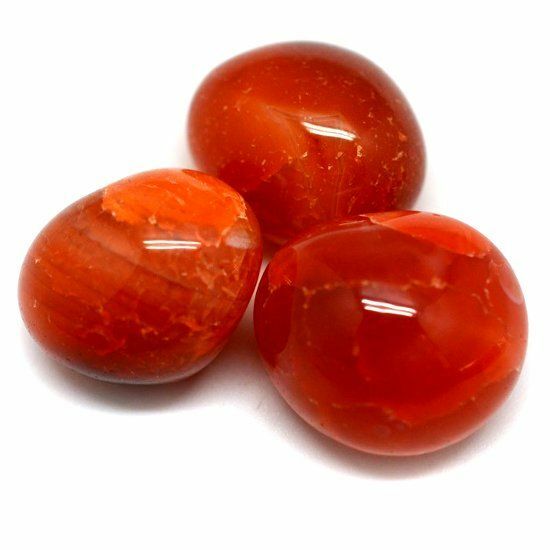 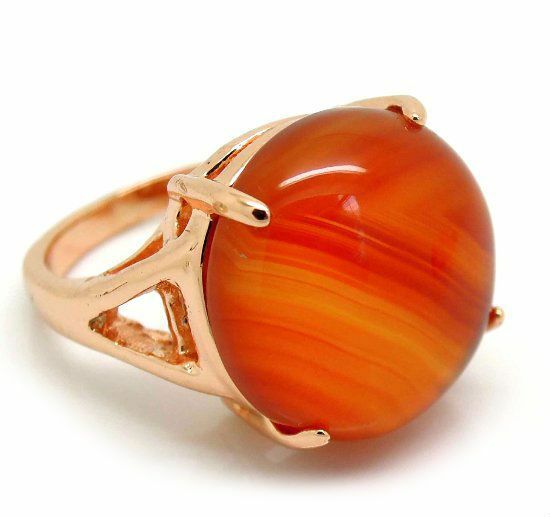 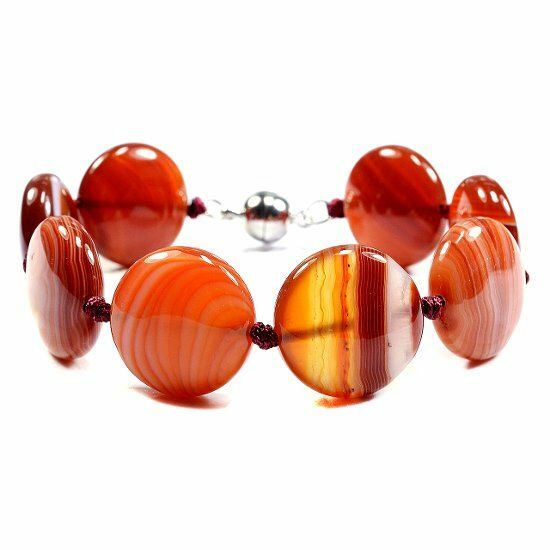 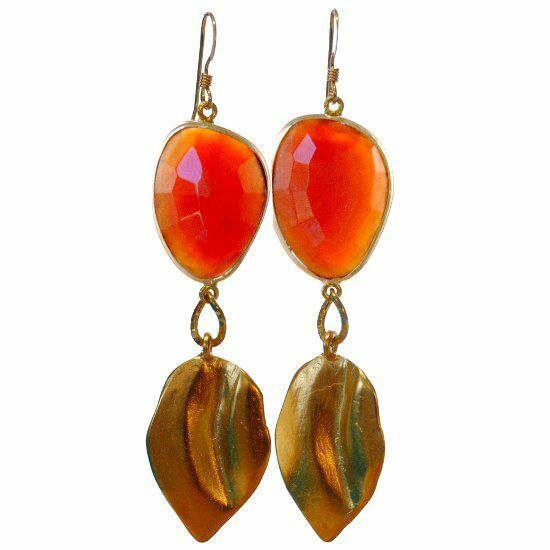 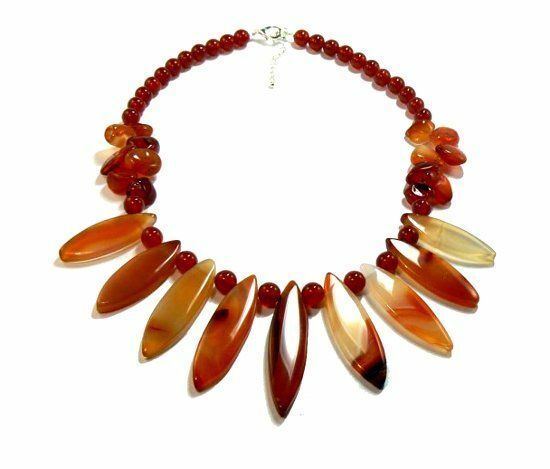