Azurite stone and its properties 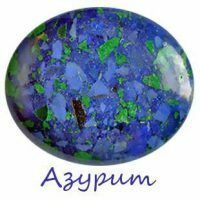 Azurite is a mysterious stone of shamans and druids, a muse of great artists and brilliant icon painters. Due to its unique properties and extraordinary sky-blue shades, the stone azurite is a dream of many collectors. Its crystal-clear blue-blue radiance shines through the ages the vaults of the Sistine Chapel.