Treatment of sun and other burns with folk remedies 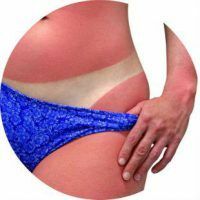 Solar and other types of burns are the reaction of the skin to excessive exposure to ultraviolet rays, chemicals, large positive or negative temperatures, and electricity. The drugstore sells a lot of drugs that eliminate redness, pain and burning of the skin. If there is no possibility to use them, people's means come to help.

Together with ionizing( radiation) are radiation burns radiation group. Occur due to the penetration of a part of the ultraviolet rays into the surface layers of the skin. As a result, the blood vessels expand, and the blood plasma can go beyond them, forming blisters. There is also an allergic reaction to radiation - activated mast cells containing histamine, which leads to redness and pain.

Most often, the face, nose, forehead, cheekbones, chin burns in the sun or in the solarium. On the body are the shoulders, the back surface of the neck, the upper back and chest, the front part of the thighs. In these places the first appear redness, painful at the touch, a feeling of tightness or crackling of the skin. A sunburn does not appear immediately, but 2-8 hours after sunburn.

In the skin of people, depending on their phototype, there is a different level of melanin( the pigment responsible for darkening the skin).Melanin absorbs ultraviolet, protecting the deep layers of the skin from its harmful effects. Red-haired, freckled people and blondes usually have fair skin, and burn faster than brown-eyed brunettes.

Sun burns are generally not deep and do not require hospitalization. However, in some cases it is necessary to consult a doctor:

Occur due to high temperatures. The striking factors are:

Burns of this type cause reactive substances:

Often the cause of skin damage are cosmetic products, household detergents and cleaning preparations, hair coloring agents, alcohol-based compounds. Sometimes caustic substances mistakenly take inside, which causes a burn of the oral mucosa, including tongue, pharynx, development of the laryngeal edema and more severe consequences.

Chemical agents that are capable of leaving a burn on the human body also include some aggressive substances released by the animals( jellyfish) and plants( castor, cow, nettle, celandine).

These are surface or skin surface lesions that occur when exposed to an electric arc or currents passing through a person's body. Such damages can be obtained with lightning strikes, touching bare wires exposed to voltage, using faulty electrical appliances.

The degree of injury, treatment methods and duration of the healing process depend on the depth of the affected tissues:

There are many prescriptions for burn remedies at home:

Read also about effective folk remedies for bruising, swelling and bruising on the face and body http://woman-l.ru/sredstva-ot-sinyakov-gematom/
to the table of contents ^

Sunlight helpsimprove children's immunity, cope with allergic reactions, increase stress resistance. Under its influence the hormone of happiness serotonin and vitamin D, which is so necessary for the child's organism, is produced.

However, sunburn in a child is much faster than in an adult. There are several reasons for this:

In addition, children are very curious, active and restless, so they often get burned by carelessness - by touching the hot surface, boiling water. According to statistics, one third of all victims of burns are children, more than half of them have not reached the age of 3 years.

Parents need increased attention when working with hot objects, during sunbathing, fires when there are children nearby. For any kind of burns, babies up to a year should be shown to the doctor.

There are several rules that will help prevent the occurrence of burns, in particular sunny:

For prevention of household burns, it is recommended: